The images in the link below are some examples of images I have created. I am interested in the idea of people curating ( co-creating) an artwork from elements that are available. No two people will chose or arrange images in the same way. Quite often they would consult with others before settling on an arrangement. For me it's interesting to watch other people make their choices of how a work will look. If it appeals to you as an idea, please contact me as I will be very happy to discuss possibilities.

My investigations into landscape are based loosely on memory. Initial marks are usually spontaneous, not pre-determined, and akin to the automatism of some Surrealist artists. If from these marks there is an instant point of recognition of forms and places I can complete the work. Sometimes they take a while to fully resolve. I have no idea how they will turn out and that keeps me interested.
Previous
Next
Ref:
Date:
Location:
Photographer:
Previous
Next
Ref:
Date:
Location:
Photographer:

As a child, I loved getting new brushes, sketch books, paint sets, pencils, etc. there was something almost mesmerising in going around an art store to pick out a few essential materials. Colours, smells, shapes, textures ( you have to feel 350g Arches paper).
The danger in these ready-to-use products is that (particularly for kids) certain primary decisions have been made for us. It's a limitation we are not readily aware of. Artists paint pictures, here are brushes and colours, off we go. We don't manufacture our own materials simply because they're ready-made and readily available ( see Duchamp on a painting as "assisted readymade").
So you have these beautiful seductive materials and then you just try to do this (potentially) creative art work. What you're doing is working like everyone else who ever used brushes and paints and you're essentially going to produce something with similar characteristics.
Apart from early tribal societies ( think aboriginal rock painting) and pre- industrial societies, it's really the 20th century artists ( Picasso to Pollock) who tried to look at new materials or old materials in a different way. Duchamp went further by challenging the use of traditional materials as the sole means of producing art works.
It took me a long time to discover that there wasn't much point in becoming a technical virtuoso with traditional materials because hundreds of thousands of people had already done it. What could I add? My solution has been to make most of my own tools for painting starting with destroying brushes by various means. The ways are many and varied. I can let paint dry on them, dip them in glue, silicone, sand whatever comes to hand. Wrap them in bandage or glass paper, dip in pva, allow to dry. I use modified cotton buds in the same way. Sticks, leaves, seeds found in the bush can be shaped and combined with other materials. You couldn't paint a replica of the Book of Kells with these implements.
My reasoning was that I wanted to make marks in a way that I didn't know what was going to happen. My paint mediums are also fabrications with anything liquid , including oil and water based, but also photocopier toner, motor oil, liquid nails, and so on. These inventions don't always succeed ( motor oil never seems to dry however little you add!). Some tools look unwieldy and actually are. They all have their own characteristics and you get to have favourites. Then it's about learning to gain control. You can achieve very fine detail or broad gestural marks with the same tool. It's very liberating and exciting to understand that all around you exists the means by which you can begin to make visual images without reaching for your brushes. 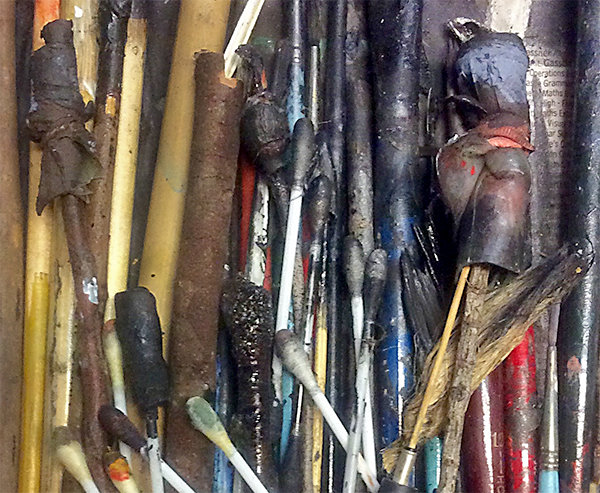 AUSTRALIA, a Work in Progress.....

At the back of Ivan Rudolph’s very readable account of one of Charles Sturt’s forays into the Australian interior, entitled “Sturt’s Desert Drama”, the publisher (presumably) has written an “About the Author ”.

In the first paragraph we learn that Rudolph was born in Rhodesia and emigrated to Australia with his family in 1985. We then read “He has proven himself a very authentic Australian with his love of the pioneering heritage of our bush and outback history”.

A very authentic Australian? The book itself seems well researched and tries to capture the struggles and hardships faced by Sturt and his party. There doesn’t seem to be an agenda to glorify a love of the pioneering heritage. Interactions with various tribal groups are portrayed through the words from diary entries of three individuals plus other sources. There are both friendly and hostile receptions along the way.

So to be an authentic Australian you have to love the vanguard of the white invasion mapping out the lay of the land as potential for the big takeover? That’s not to say that Sturt and Mitchell et al were not unsympathetic to the Aboriginal plight but the reality is that they came to take what they felt was created for them……

“Curiosity alone may attract us into the mysterious regions still unknown; but a still deeper interest attaches to those regions, now that the rapid increase of the most industrious and, may we add the most deserving people on earth, suggests that the land there has been reserved by the Almighty for their use.”

(Extract from the Preface of Thomas Mitchell’s 1948 journey into the Interior…..)

Ordained by God, say no more…….

In trying to work out what to be Australian is, it would perhaps be more useful to look at this paragraph from the book “In the Darkroom” by Susan Faludi, page 326.

“Totalism, Erik Erikson had cautioned, could set in when the search for identity becomes an insistence on a "category -to -be -made-absolute," displacing psychological complexity and self-awareness. Instead of teasing out the component desires and conflicts and injuries that shape a personality, instead of inspecting (and confronting) the social and economic conditions and history that form and deform individual lives, identity could dangle the dangerous panacea of a single global fix. Could a nation succumb to the same temptation? What happens when a government champions a unitary image as a substitute for reckoning with its country's real historical baggage and grappling with it's citizens real problems? “

Isn’t this what we see from those people who measure Australian values via the Gallipoli channel, the spirit of the Anzacs, etc.. It’s un-Australian ,we hear, as soon as it involves people of non-Anglo-Saxon origin. There’s a fear about bringing the truth out into the open. We need to acknowledge the truth about dispossession, about the British invasion of these shores and its attempts to sweep aside a culture that was considered primitive and savage and who dared to defend it’s homeland. In the annals of histories of invasions we tend to consider resistance movements as heroic but, for some reason, not in Australia. Arrogance and ignorance. Where does it end?

When I was a kid I used to walk down the lonins which were sort of back lanes just outside The Crofts (a euphemistic name for a new council estate) at West Silloth in Cumbria,UK. They were always green. Just off to the southern end of the estate were the allotments where people used to spend a lot of time growing things and then if you just followed the lane around the side of the allotments there was Fison's chemical factory. It was just all part of the natural environment to us. It looked like it had always been there. Who knows what they were belting out and throwing around and polluting the air with. They produced chemical fertilisers for farmers and we all breathed it in. There was always this certain smell in the air. It was a a massive factory constructed in huge metal panels and it was always covered in a white dust and that's all I remember about it. Right next to the fruit and vegetables. It was normal and no doubt it's still normal for many kids across the globe.

I think most artists prefer the work they are currently doing because it's in the moment and the work is forming so it's more interesting.

Past work ossifies over time, it's stagnant, it's something that belongs to the past like a fossil. Because the artist knows the work intimately, and the thoughts and actions that went into it, they don't need to revisit. They're not looking at a terminal product but more of a time capsule. Think Robert Morris "Box With The Sound Of Its Own Making" (http://www1.seattleartmuseum.org/eMuseum/code/emuseum.asp?style=browse¤trecord=1&page=search&profile=objects&searchdesc=robert%20morris&quicksearch
=robert%20morris&newvalues=1&newstyle=single&newcurrentrecord=1)

They might look and reflect on it from time to time but it doesn't hold the same interest as this new work.

These old works, for people other than the creator, don't have that time frame. The viewer's experience is in the present even though they could be looking at something produced a hundred years ago. If it's their first encounter it's refreshing and interesting and engaging. It's like when I look at an actual fossil I think it's something remarkable because I can stare at it for a long time and try to imagine when it moved millions of years ago. To me that is really fascinating. Your own fossils are not.

For what we are about to receive.... 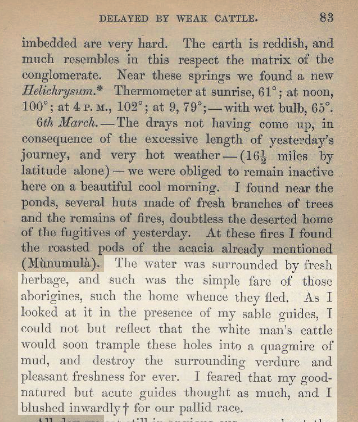 Aboriginal Australians: A History since 1788 by Richard Broome